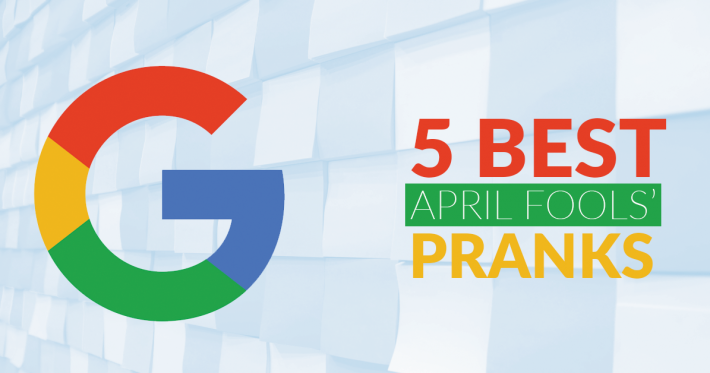 Today is the first day of April, otherwise known as April Fools’ Day, and you know what that means – trust no one and especially not Google.

Google has a history of playing April Fools’ pranks on users of the world wide web, and while I wish I could reach their level of hoax-mastery, I realize that those dreams may never come true.

So, I will settle for trying to learn from their expertise. In honor of the internet god that is Google, here are my five favorite April Fools’ pranks from Google, in no particular order: I begin with their prank from 2000 because it feels appropriate to have a little throwback.

On April 1st, 2000, Google released MentalPlex, a search engine that could read your mind and perform searches without ever having to type a thing. Wow, Google! That’s some pretty high tech stuff for the modest year of 2000.

The instructions were simple:

Upon clicking the circle, search results for “April Fools'” appeared, as well as a notice that MentalPlex was “unclear on whether your search is about money or monkeys.”

This is one of my favorites because I can just picture millions of internet browsers leaning into their computers, concentrating real hard with a squished up face, then feeling like a complete dummy when they realize it was just a practical joke and awkwardly looking over their shoulders.

Oh, was that just me?

Considering this was long before social media and businesses really had any personality or web presence, it’s fun to think that Google was likely quite impressed with themselves for being so clever.

Google clearly has a flair for the ridiculous. On April Fools’ day 2002, they decided to reveal the secret inner workings of its search technology – pigeons. Yup, you read that right.

Apparently, Google did their best to convince the world wide web that clusters of pigeons had been trained to rank pages by quickly striking a rubber-padded, steel bar with their beaks when a relevant result appeared.

They explained, “PigeonRank’s success relies primarily on the superior trainability of the domestic pigeon (Columba livia) and its unique capacity to recognize objects regardless of spatial orientation.”

Sounds pretty convincing with all the techie-jargon, but not so sure they got too many believers out of it. This prank makes my list because I happen to have a love for the ridiculous.

You can check out their original PigeonRank site to this day – graphs and all.

On April Fools’ Day 2010, Google went for a subtle and rather hilarious prank. They announced that they would be changing their name to Topeka. What’s the significance of that?

Well, the mayor of Topeka, KS unofficially changed the name of their city to Google, KS for the month of March. “It’s just fun. We’re having a good time of it,” explained the Mayor. Google certainly took notice, and felt inspired enough to make a big change of their own.

Google’s remarks: “We didn’t reach this decision lightly; after all, we had a fair amount of brand equity tied up in our old name [clearly]. But the more we surfed around (the former) Topeka’s municipal website, the more kinship we felt with this fine city at the edge of the Great Plains.”

Google knew the new name would take some getting used to, but assured users that Topeka Maps and

other services would cover all geographic locations, not just Topeka, KS. How kind of them to clarify!

The name change even came with instructions on proper sentence usage. Looks like Google was having a “good time of it” themselves, Mr. Mayor.

Ever wonder if your milk really has gone bad? What does bad milk smell like? I’ll tell you one thing, Google Nose (see what they did there?).

In 2013, Google announced their new search function, Google Nose BETA. Google felt like there was a certain aspect to their search engine that was missing – a whole sense was left out. Thus, the creation of Google Nose, a way to search through smell and also to search for smells through their “Google Aromabase.” In the video promo released, Google designers mock themselves, claiming to be inspired by walking their new puppy. “This is how she gets information about her world,” exclaims one designer as he passionately describes how his puppy sniffs every square inch during their walks.

This particular April Fools’ hoax has a bit of a history lesson, as it recalls an April Fools’ joke from 1965 released by the BBC.

I am quite the fan of this particular joke, because while I’m sure Google recognizes their internet mastery, it’s always great to see a corporate giant that is able to make fun of themselves.

You just can’t beat a classic.

While I admire creativity, it’s hard not to praise a prank so thoroughly infuriating. What YouTube/Google did, much to the chagrin of our funny sounding cousins overseas, was direct all featured video clicks to Rick Astley’s “Never Gonna Give You Up.”

Although “Rickrolling” was supposedly only a year old by the time YouTube kicked off this April Fools’ prank, by now the joke is forever branded onto our hearts.

This was the first YouTube prank after Google acquired the site as part of their internet empire. I can just imagine how giddy the masterminds behind the prank felt as they threw their heads back and laughed maniacally while rubbing their hands together.

Oh, you thought I was done? April Fools’! This year, Google really outdid themselves with ludicrousness. And I love it!

So, what does Google Cardboard Plastic do? It goes beyond virtual reality and steps into actual reality. Because, as they say, “What’s realer than real? Probably nothing.” “What we really wanted to do was make… something… feel… real,” the video explains. Well, I think they really hit the mark on this new piece of technology.

Google, you did it again.

Are you feeling inspired, yet? Getting immersed in the spirit of April Fools’ Day? The day is young! Go out there and prank a loved one. Nothing says “I love you” like a fake, positive pregnancy test.

What evil plans do you have up your sleeves for this April Fools’ Day?