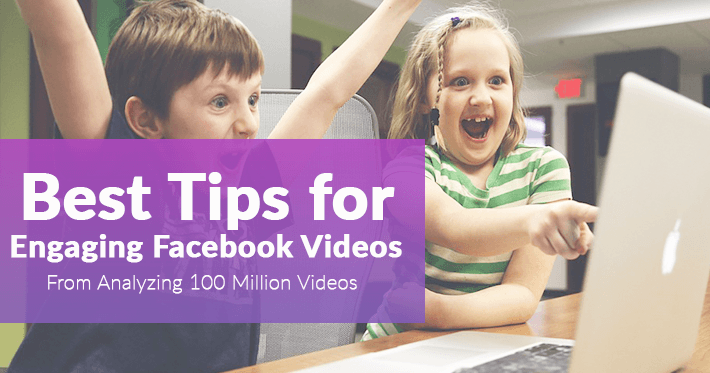 Videos are the most widely shared content on Facebook right now. As time goes by videos continue to be the dominant piece of content on everyone’s Facebook feeds. Since videos dominate the feed, your company needs to be able to stand out from everyone else. It’s a good idea to know what works and what doesn’t with videos. We have used the data collected by Buzzsumo to demonstrate the best ways for your Facebook videos to be successful.

According to the Buzzsumo chart below the most engaging topic for videos was food. Videos of fashion, beauty, and animals come in second with only half the interactions of food videos. Some of the pages with the most engaging content are Buzzfeed’s Tasty and Delish. Both of these pages specialize in different kinds of food recipes and earn an average of a few million views on a majority of their videos. Recipes, How-To, and DIY videos always have high engagement due to the fact that they provide informative and short videos. This is easy to see by looking at the DIY page Blossom that caters to quick DIY hacks and receives an average of a few million views on each video. It’s clear people prefer videos about food, fashion, and DIY projects instead of real estate and finances. Another chart created by Buzzsumo collected data on millions of Facebook videos to find the ideal length of time for videos. As the chart shows below, shorter videos receive more interactions on average. The ideal length of time for videos is 60 to 90 seconds long. After 90 seconds of video, interaction clearly starts to decrease as time goes by. However, by around 6 minutes engagement seems to remain constant with not much change for longer lengths of time. It should be noted that while shorter videos seem to receive more interaction the videos between 0 to 30 seconds of length receive the least amount of engagement overall. Facebook Live videos are a huge part of Facebook and get priority over other videos on the news feed. In April, Fidji Simo, head of video for Facebook, announced in a public post that one in five videos shared are live streams and the daily watch time quadrupled in a year. In contrast to regular Facebook videos, the interaction for live videos increases the longer the video lasts. This increase occurs until about the 15 to 16-minute point where interactions stabilize. Furthermore, the top performing Facebook live videos were 20 minutes long on average. So, when doing a Facebook live video for your company the longer the better. Ever since Facebook introduced new reactions, people have been doing much more than just liking a video. So, Buzzsumo compiled data of reactions from millions of videos and found that the ‘haha’’ reaction was used most. The ‘love’ reaction came in with the second most interactions. This shows that a majority of people tend to react positively to Facebook videos. Now for Facebook live videos, the ‘love’ reaction dominated whereas the ‘haha’ reaction was one of the lesser used reaction types. Overall, the average amount of reactions for live videos was almost half as much as regular videos. This is mainly due to the fact that people commented more on live videos instead of reacting to them.

The team at Buzzsumo continued their data collection by finding the ideal amount of text for a Facebook video. After analyzing the top 10,000 engaging Facebook videos between June 2016 and June 2017 they found that videos with shorter amounts of text were more successful. Additionally, the analysis found that the average about of characters were 84 for Facebook video captions. When videos come up on someone’s facebook feed they want don’t want a paragraph a text but a tiny blurb about the video. The text of a Facebook video should not take away from the video itself.

At a time when videos are prominent on all social media, not just Facebook, you want a company that knows engaging content. Here at Brandamos, we have produced many successful videos for social media. Check out our work and video production services here.