Digital Marketing Trends to Watch in 2016 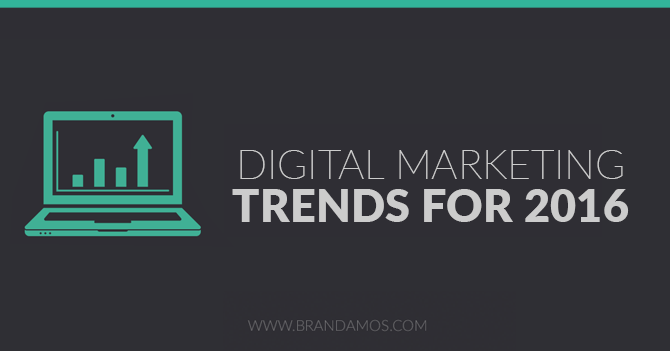 With every passing year, as new companies, technologies, hardware and user preferences emerge, the digital marketing landscape changes and evolves, sometimes quite dramatically. In order to stay ahead of the curve, digital marketers must be prepared to be early adopters of these new marketing possibilities.

Major corporations will already be spending millions on upcoming trends; while that kind of investment remains out of reach for small to medium enterprises until the technologies mature, it’s still worth knowing which way the wind is blowing–here’s our guide to some significant digital marketing trends to watch in 2016.

The Domination of Mobile

This past year has been a “Really Big Year” for mobile, with mobile traffic outdoing desktop traffic across ten countries. Google’s mobile algorithm update, phasing out sites which aren’t optimized for mobile, was further confirmation, if confirmation were needed, that mobile sites are here to stay (or are they? See #2; we live in exciting times!).

There is no reason to think that the increasing usage of mobile devices will decline in any way in 2016; if you’re not already on board with mobile optimization, you need to come out from under that rock now, before it’s too late.

The Rise of Apps

Apps, of course, are nothing new. However, now that Google is increasing the complexity and nuances of its ranking of apps, 2016 should see an explosion of apps for individual businesses. There’s very little your mobile-friendly website can do which an app can’t do too, often better and with that bit more punch and panache.

Eventually, it wouldn’t be surprising to see mobile-friendly websites being phased out in favor of apps. We’re not quite there yet, but 2016 should be an important year during which more and more business owners recognize the benefits of creating an app for their customers.

As Google introduces in-SERP video advertising, video has never been more important to your digital marketing strategy. It’s been known for some time that video is one of the most engaging and arresting way of communicating with your customers, so 2016 should see many more small-medium sized enterprises dipping their toes into video marketing.

Virtual reality has had a checkered history when it comes to actual adoption by the everyday man in the street. However, early 2016 sees the release of Facebook’s Oculus Rift, which could well be the game changer which sends virtual reality mainstream at last.

If the Oculus Rift and other devices, such as Sony’s VR headset, do well, then this opens up a whole new world for savvy digital marketers to mine. It could end up being just another niche product or a fad—after all, VR has failed before—but with billions of dollars of investment behind these products, 2016 could perhaps turn out to be the year when virtual reality becomes a reality for marketers too.

The Internet of Things

The IoT is the concept of everyday items—your watch, your refrigerator, you air conditioner, your car—all being “online” and able to share and use data. Adoption of wearable technology is estimated to reach 26% during 2016, and the IoT is fast becoming a reality. This creates a whole new set of possibilities for digital marketers, who will be able to use data about people’s lifestyles, habits and likes in a way never before possible. Expect 2016 to hold some interesting developments in this area.

If you’re reading all this and thinking “great…but this all looks very expensive!” hang in there. Aside from creating apps and videos, getting to grips with all the possibilities and developing a whole new VR strategy, there’s one simple thing brands still need to do to get ahead, and that’s to continue to create valuable, useful, engaging content for their consumers.

Statistics released by the Content Marketing Institute reveal that 80% of business decision makers would rather get their information from articles than from advertising. Meanwhile, 90% of consumers find good content useful, and nearly 80% believe that it shows that the company is interested in them and their needs, with a similar figure stating that it leaves them with a good impression of the brand.

As the bells and whistles advance apace, customers are still grounded enough to want useful content, and will no doubt continue to reward companies that provide it for them.