Brandamos is skilled in the art of time lapse creation and we can develop an amazing video for your business. Our time lapse reel includes many scenes from Fort Lauderdale, Miami, and New York. However, due to agreements in place, we can’t show all the time lapse videos we have created. The timelapse reel below is just a sampling of some of our time apses over the years.

Who We’ve Timelapsed With

What is Timelapse Photography?

From wikipedia: “Time-lapse photography is a technique whereby the frequency at which film frames are captured (the frame rate) is much lower than that used to view the sequence. When played at normal speed, time appears to be moving faster and thus lapsing. For example, an image of a scene may be captured once every second, then played back at 30 frames per second. The result is an apparent 30-times speed increase. Time-lapse photography can be considered the opposite of high speed photography or slow motion.

Processes that would normally appear subtle to the human eye, e.g. the motion of the sun and stars in the sky, become very pronounced. Time-lapse is the extreme version of the cinematography technique of undercranking, and can be confused with stop motion animation.”

So to create a time lapse video it requires hundreds or thousands of pictures stitched together to form one video. Time Lapse videos are great for construction projects, restaurants displaying the hustle and bustle of the dining room, and more. Time lapse videos can be used for both interior and exterior scenery as well as night or day. 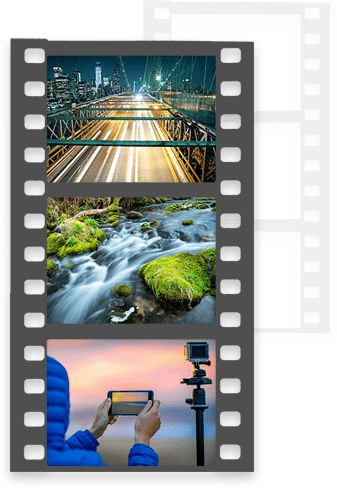 Whether your project is for long term construction or a short term art installation, we have time lapse photography solutions for any situation. If your project requires moving time lapse rigs, we have it. If you need static time lapses we can help. If you require low light or night time lapse videos, we can capture those as well. Our timelapses have been used in international major and minor motion pictures, television dramas, documentary series, construction projects, and corporate videos.

Need to Talk to Us About Your Timelapse Project?